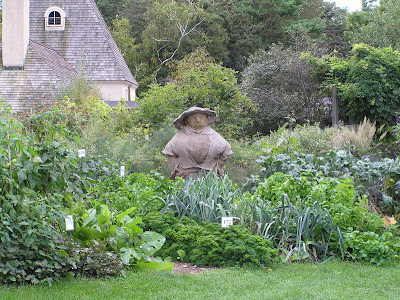 When I typed the word "Potager" in google, I found a number of definitions, all of them basically the same. A potager is a French styled, country- kitchen garden. In other words, a vegetable garden. What makes it different than any basic vegetable garden is that the plants are not simply planted in rows.

I've seen some beautiful vegetable gardens, the only one that would officially fit the description of a Potager is at Stonecrop which is in Cold Spring New York.

Our garden club went there to see their alpine and trough collections. I had no idea they had a potager there and was totally blown away when we stepped into this area. 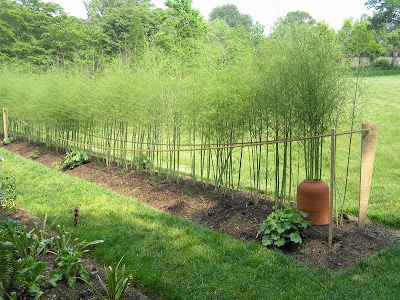 Visiting Chanticleer in the Philadelphia Pennsylvania area, I saw some beautiful vegetable gardens but I wouldn't classify them as a "potager". This row of Asparagus sure was beautiful but I don't have a crew of gardeners to help me maitain something like this.

As I went through my photos for this post I was surprised that I didn't have more that showed pretty vegetable gardens. In fact, I had no more photos of vegetables at all! 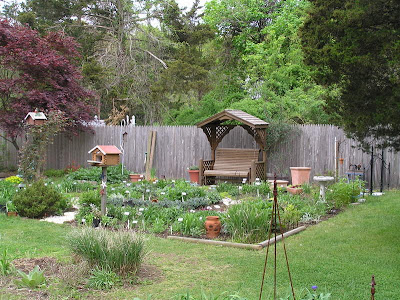 Here in my own garden I have an area that has undergone a few changes. It started as a seedling bed when I was hybridizing daylilies. The daylily seedlings were grown in straight rows and other than during daylily bloom season it was very blah.

In 2006 we were a tour garden for the National convention of the American Hemerocallis Society (that's daylilies) and I totally changed this area. It became an herb garden that also incorporated spider-style daylilies.

Over the past two years I've been moving the daylilies out of this area. Just over the fence is a grouping of Black Walnut trees (Juglans nigra) and they emit a toxic product (jugulone) from their roots and my daylilies just don't grow well near them. Other plants though seem to grow just fine there, it's a trial and error kind of thing.

On Wednesday we had two yards of aged horse manure dropped off here. This weekend we'll be moving loads of it to this spot in our garden. I'll be moving out and potting up those spider daylilies for sale and we'll back fill the garden with the old manure.

Guess what I'll be planting?

Did you guess vegetables?

This just might be the year that I finally have a potager!

Melanie
Posted by Melanie Chopay at 7:23 AM 5 comments: 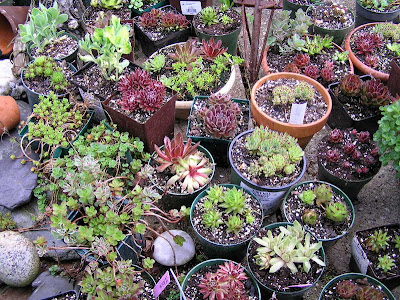 Ok, I admit it, I have a problem... I can't help it, I just can't stop playing with these amazing little succulents! Now that I've found a great source for hypertufa troughs, I just know it's going to get worse. 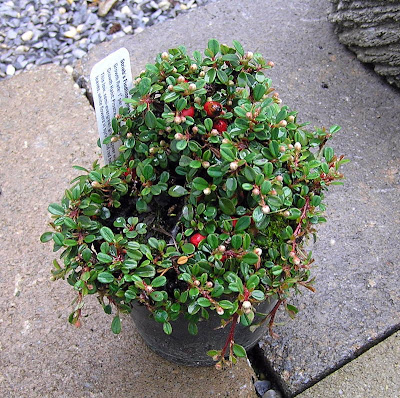 Not all the plant material I bought for the troughs are succulents, there's one or two other things I couldn't resist such as this dwarf Cotoneaster 'Strieb's Findling'. 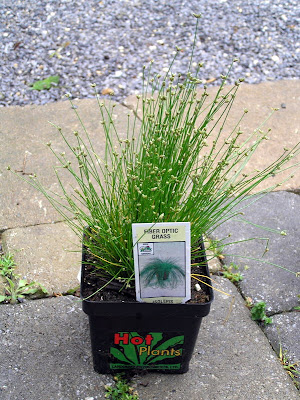 There's also the Fiber optic grass (Isolepsis) that I can never resist even though it's not hardy here in my zone 6b garden. 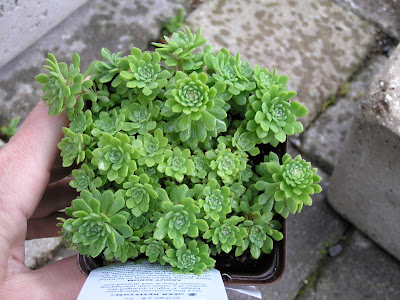 Sedum nevii is another plant that I think I've bought before but I just had to try again. 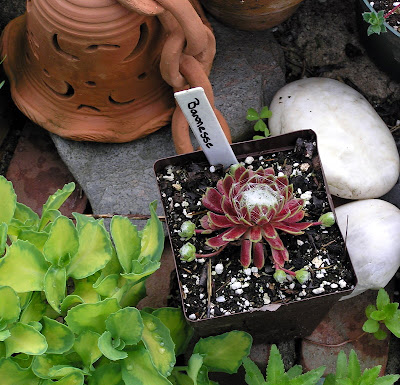 One of my favorite (ok, that's silly, they're all my favorites) is this little Sempervivum 'Baronesse', just look at the webs!!! 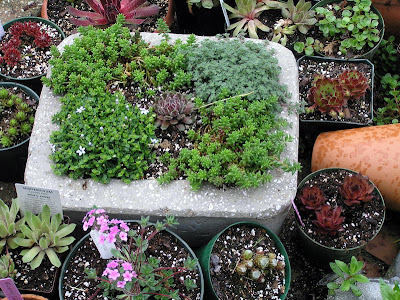 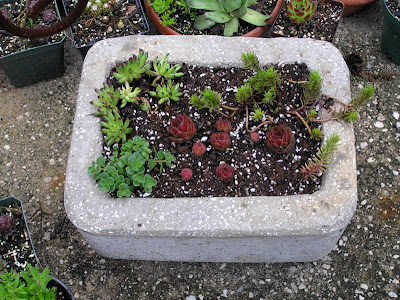 Here's another planted trough. This one looks a bit skimpy next to the first one but I've learned from past experience to leave some space for the semps to fill in. 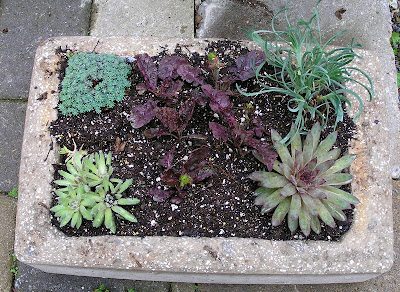 This trough was planted up on Friday. I'm not sure yet about the Salvia lyrata 'Purple Knock-out' in the center of the trough. I hope they beef up quickly. 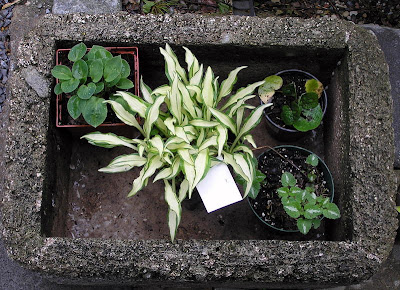 Under construction as I write this is a large shade trough. It's got a Hosta 'Pixie Power' slated for the center, and a teeny weeny Hosta 'Baby Tears' for the upper corner. I'm not sure about the rest of it though, I did get my hands on some amazing colored Ajuga's that might be perfect. 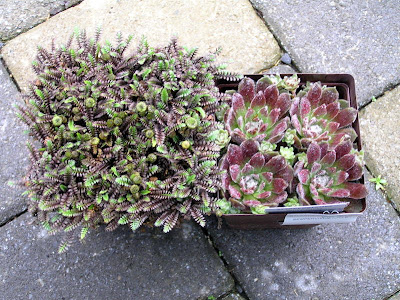 Sometimes it's the container that inspires me, other times it's the plant material. This combination of Cotula squalida 'Platt's Black' and Sempervivum 'Icicle' had me in rapture. 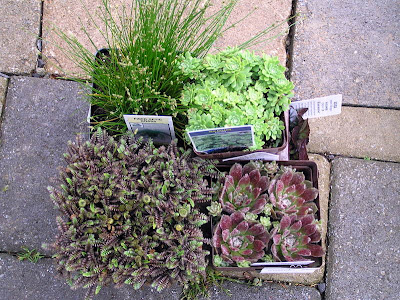 I didn't want to add a color that would take away from the two of them so I decided to go with some added textures. The Sedum nevii and the Fiber optic grass fill that slot nicely. 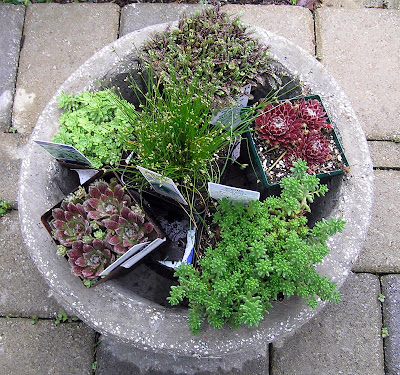 It's not planted yet, I'm not 100% sure on the fifth sempervivum. I have a bronze colored semp that I need to look for and try in this spot too. By the end of the day today though it will be decided and planted up.

The crazy thing? I spent all this money on these containers and plants and justified my purchase on the idea that I would sell them and make a profit. Now though I can't possibly imagine how I could let these go.

What do you think? Sell them? Make more of them? Cover my whole property with wonderfully delicious succulents?

I'll have to think this over, maybe if I walk around a few nurseries today I'll find some more...I mean I'll clear my mind and make a decision :-)

Going crazy,
Melanie
Posted by Melanie Chopay at 11:41 AM 13 comments: 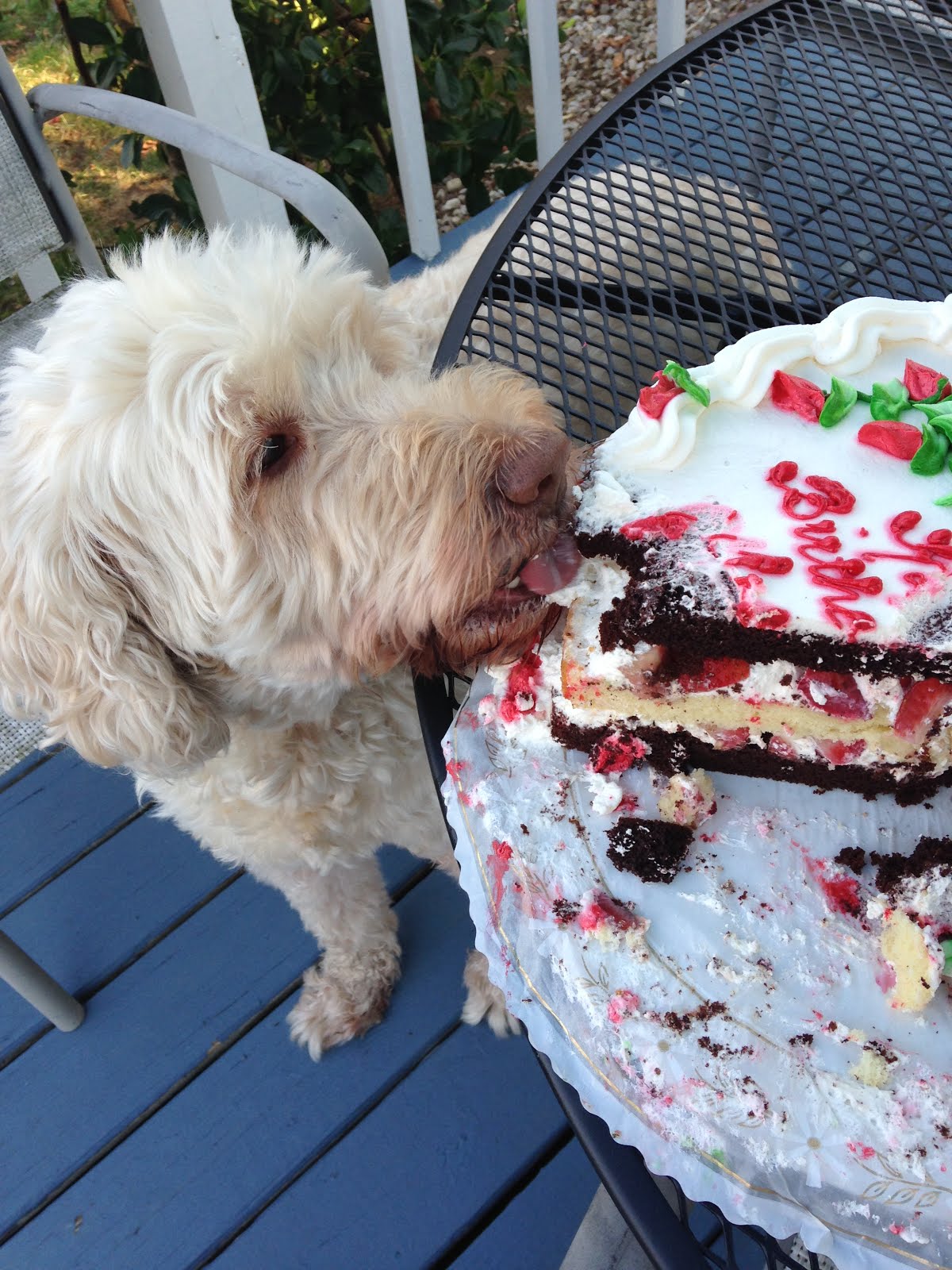 A Long Island woman's passion for gardening, now evolving into a business. (When I grow up I want to be...)

Visit our Long Island based blog too! 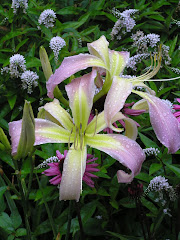 Melanie's Perennials has been designed and dedicated to Long Island Gardens but you'll find lots of information there for gardeners all over the world. Just click on the photo to stop by and visit us there.